Whether you are a bicyclist, walker, equestrian, nature lover, or history buff, the 225 miles of the Katy Trail State Park offer opportunities for recreation, a place to enjoy nature, and an avenue to discover the past. 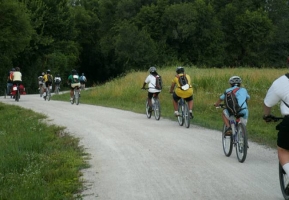 Gentle rolling hills and prairie beckons you to come and play in Sedalia, located on Highways 65 and 50, only 18 miles south of Interstate 70 in west central Missouri.

Each year for eleven days in mid-August the Missouri State Fair features “the Best of The Best” in agriculture. The Fairgrounds also plays host to camping rallies, sports tournaments and trade shows. Sedalia is recognized as the birthplace of Ragtime music and celebrates with an annual June festival.

At Fairgrounds corner is Sedalia’s newest landmark, Trails End. It commemorates cattle drive and railroad heritage. The strong history as a railroad center positioned Sedalia as a cattle drive destination.The 1960's television show, Rawhide, depicted the life of the cowboy and the romance of the cattle drive era as they headed to Sedalia.